Volumetric Relaxation in a Prony Series

A linear viscoelastic material model is defined using an elastic response together with a Prony series relaxation. Here’s an example using Ansys APDL:

In this article I will illustrate specific cases where you  should consider include volumetric relaxation in your linear viscoelastic Prony series. It turns out that it is easy to do this with MCalibration!

Figures 1 and 2 show the experimental data that I used for the study. The DMA experiments were performed in uniaxial tension, and the Time-Temperature-Superposition (TTS) master curve was generated from data at different temperatures. Figure 1. Experimental storage modulus as a function of frequency. Figure 2. Experimental loss modulus as a function of frequency.

Figure 3 shows the results from MCalibration’s instantaneous linear viscoelastic parameter selection. The parameters that are selected by MCalibration are based on the assumption that all viscoelastic relaxation is shear driven. The predictions are obviously very accurate, but what are the consequences from the assumption that all relaxation is shear driven? The calibrated material model in this example is based on Neo-Hookean hyperelasticity together with a 30-term Prony series. In MCalibration I can quickly examine the stress-strain predictions from the calibrated material model in, for example, uniaxial tension tests at a constant strain rate (using a “Virtual Experiment”). In Figure 4 below I selected 3 widely different strain rates (1e-6/s, 1e6/s, and 1e20/s). As expected, the stress-strain response becomes strongly strain-rate dependent. The Poisson’s ratio of the calibrated material model depends on the hyperelastic parameter d and the amount of volumetric relaxation (which here is set to zero). The figure shows that the Poisson’s ration is between 0.47 and 0.499 depending on the strain rate. As a second example, I kept all parameters the same except that I increased the d parameter by 10X to 0.01/MPa. In this case stress-strain predictions at the highest strain rate becomes a bit softer, but more interestingly, in this case the predicted Poisson’s ratio becomes highly dependent on the applied strain rate. It is seems unlikely that the Poisson’s ratio is about 0.499 at slow rates, and less than 0.3 at high rates. More experimental data would be needed to determine if that response is good or crazy! My bet is on crazy… A Third Material Model with a Constant Poisson's Ratio

It is easy to modify the material model so that the predicted Poisson’s ratio becomes basically independent of the applied strain rate. All we need to do is to make the bulk modulus relax the same way as the shear modulus. Figure 6 shows a screenshot of MCalibration where I made each rel_k value equal to the corresponding real_g value, and I also made sum_k equal to sum_g. The predictions from this material model is shown in Figure 7. As before, the magnitude of the Poisson’s ratio is mainly determined by the d value, but the strain-rate dependence of the Poisson’s ratio is in this case almost gone. All Posts »
PrevPreviousBest Material Model for CPVC
NextWLF or Arrhenius – Which is Better?Next How to Model the Gough-Joule Effect in Rubber Seals

What is the Gough-Joule effect and how to model it in a finite element analysis? This article explains it all. 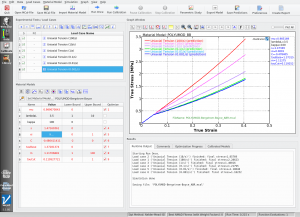