Let’s start by considering the following thought experiment. Let’s apply a jump in strain (at time=0) and then hold that strain constant. At the same time measure the stress as a function of time. For most real polymers the response will look something like what is shown in Figure 2. We can then define the stress relaxation modulus from: \( E_r(t) = \sigma(t) / \varepsilon_0 \). As I will show below, the stress relaxation modulus is all that is needed to fully determine the stress for any strain history.

Figure 2. The stress will gradually relax after a jump in strain.

To make this more useful we need to be able to analyze general strain histories. The first step to do this is to write the applied strain as a sum of strain jumps: Figure 3. The applied strain history can be approximated by a number of strain jumps.

By using Boltzmann’s superposition idea, the total stress simply becomes the sum of the stresses from each strain jump:

This equation can be converted to an integral since we are summing over an infinite number of small strain jumps:

This equation can be converted to a time integral by dividing by and multiplying by \( d\tau \):

This master equation shows us how to calculate the stress from any uniaxial strain history. Pretty cool!

Let’s test the master linear viscoelasticity Equation  (1) for a case with a strain jump at time 0 (as is shown to the left of Figure 2). To calculate the stress response we also need to have an equation for the stress relaxation modulus as a function of time. Assume the following form: \(E_r(t) = E_0 \exp(-t/\tau_0)\). This equation is particularly convenient since the integral of an exponential function is also an exponential function. If you perform the calculation you will get the following equation of the stress: \( \sigma(t) = \varepsilon_0 E_0 \exp(-t / \tau_0)\). The results are plotted in Figure 4. At really large strains the stress reaches a steady state value of \(E_0 \dot{\varepsilon} \tau_0\), and the initial Young’s modulus is \(E_0\). The stress response due to an arbitrary strain history can be calculated using Equation (1). In a general case the stress cannot be expressed in closed form, but must be numerically calculated. One way to do this is to use the Julia code shown below. In this case I used the same stress relaxation equation as in Examples 1 and 2, but I apply a load-unload cycle.  The strain rate was 0.01/s, and the max strain was 0.1. Note that the code presented here is perhaps the most inefficient way to calculate the stress. I simply solved Equation (1) numerically using the quadgk() function in julia. In an upcoming article I will show a significantly more efficient way to calculate the stress response. It is, of course, also possible to calculate the stress response for this specific case using MCalibration. Figure 7 shows that the MCalibration results are very similar to the results from Julia. 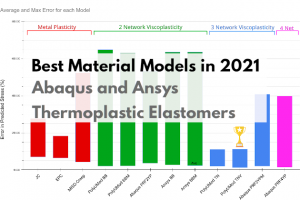 Study aimed at determining the most accurate material model for a polybutadiene rubber exposed to large strain time-dependent loading. 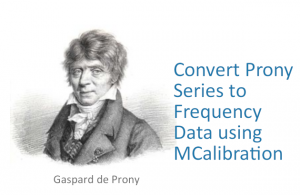 Instructions for how to quickly convert a Prony series to storage and loss modulus as a function of frequency.