A lot of FE engineers have heard of parallel network models, like the Ansys TNM, the Abaqus PRF, and the PolyUMod TN and TNV models. Most FE engineers, however, do not have a great intuition for how these models work. Specifically, how to connect the rheological structure to the predicted stress-strain response. In this article I explain how you can graphically visualize the rheological model in order to better understand how these models behave. Note that this class of material models is the most accurate that exists for polymers!

All results presented in this article were generated using MCalibration. Get your own free trial license today!

Figure 1 shows the stress-strain predictions from a one network model. The spring element is Neo-Hookean, and the flow element is power-law (see equation in the figure). Figure 1. Stress-strain predictions from a one network model.

The stress-strain response of this model is initially linear until viscoplastic flow starts at a stress that is controlled by the flow resistance (sometimes called “yield stress”) \(\hat{\tau}\), and the power exponent m. Note that once the dashpot starts to flow, the (true) stress stays constant. Also note that even though \(\hat{\tau}=10\) MPa in this example, the onset of flow occurs at a stress of about 7 MPa.

Figure 2 shows the stress-strain response of the model at two different strain rates. We see that the yield stress is strain rate dependent. The reason for this is that the flow rule (see the equation in Figure 1) does not have a yield surface. If the parameter \(m \rightarrow \infty\) then the rate of viscoplastic flow becomes zero if \( \tau < \hat{\tau} \), and \(\infty\) if \(\tau > \hat{\tau}\). This is traditional plasticity without hardening. Figure 2. Strain-rate dependence of a one network model.

Figure 3 shows the predicted stress-strain response during a load-unload cycle. Note that the load and unload slopes are the same, the yield stress in tension and compression are the same, there is no stiffening after yield, and the predictions of the residual strain are poor. These are reasons why a single network model is virtually never good enough. Figure 3. Load-unload response of a one network model.

A two network model obviously consists of 2 parallel networks. The total stress response is given by the sum of a single network model (see previous section) and a pure hyperelastic network.

Figure 4. Decomposition of a 2 network model into separate networks.

The stress contribution from each of the two networks is visually shown in Figure 5.  The pure hyperelastic network allows us to control the predicted stress-strain response after yielding. This is the reason why parallel network models almost always haave one purely hyperelastic network.

Figure 5. Decomposition of the stress-strain response of a two network model.

The predicted load-unload response is shown in Figure 6. Even in this case the loading and unloading slopes are the same. This model is a simplified version of the Bergstrom-Boyce (BB) model. The BB model is using a more advanced flow equation with that includes strain dependence. Figure 7 shows the rheological representation of a three network model. Two of the networks are viscoplastic, and one is hyperelastic. It may seem odd to use the same network type twice in a model. After all, what benefit would that give? It turns out (see Figure 8 below), that having more parallel networks makes it possible to tailor the shape of the stress-strain curve.

Figure 7. Decomposition of a 3 network model into separate networks.

Figure 8. Decomposition of the stress-strain response of a three network model. Information about our upcoming webinar on how to quickly use experimental data to calibrate a non-linear viscoplastic material model. 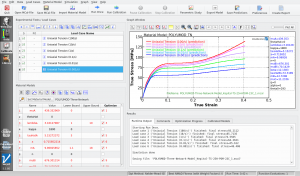 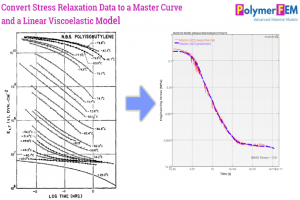 Tutorial showing how you can take experimentally stress relaxation data at different temperatures and create both a master curve and a linear viscoelastic material model that captures all the data.