Flow Cessation is Important for Viscoplasticity In this article I will show to improve the viscoplastic predictions of these two problem. And yes, one of them can be fixed using Flow Cessation. I will explain all of that below.

Traditional viscoplastic material models (like the Bergstrom-Boyce model, the Three Network model, the TNV model, and the Abaqus PRF model) can all be used for both rubber-like and stiff thermoplastic-like polymers. Most of these models use a constitutive equation in which the viscoplastic flow rate is proportional to the driving shear stress raised to a power m. The parameter m is typically small (between 2 and 6) for rubbers-like materials, and significantly higher (between 10 and 20) for stiff thermoplastics. One common problem with this approach is that the initial Young’s modulus tend to be almost independent of the applied strain rate if the m parameter is large. One way to improve the predictions is to make the power exponent m depend on the applied strain magnitude. See the figures below. This modified strain-dependent flow rule has been in the PolyUMod PN model for many years, and we have now added it to the TNV model too 👍.

The traditional power-flow equation in the viscoplastic material models also tend to underestimate the influence of the deformation rate at large strains. This can be seen in the figures above where the stress-strain curves at different strain rates tend to converge at large strains. This is often not how real polymers behave! One way to improve this behavior was developed by Dupaix and Boyce [Mechanics of Materials, 39 (2007), 39-52]. They showed experimentally that at large deformations there is a cessation of the molecular relaxation (and flow), and they proposed the following equation to capture this effect: \[\dot{\gamma}^p = \displaystyle
\left(
\frac{\displaystyle\frac{\alpha}{\alpha_c}-1}
{\displaystyle\frac{\alpha_0}{\alpha_c}-1}
\right) \cdot (C \alpha \tau)^{1/n}.\] In this equation \(\alpha = \pi/2 – \alpha_{max}\), and \(\alpha_{max}\) is the max angle between the eight-chain representative macromolecules and the 3 principal axes. What makes this model interesting is that they showed that the material parameter \(\alpha_c\) is independent of the temperature and strain rate.

I like this model approach, but to make it even more useful I decided to make a few modifications. I specifically propose the following equation for the flow rate: \[\dot{\gamma}^p = \dot{\gamma}_0 \cdot f_v \cdot \left( \frac{\tau}{\hat{\tau}} \right)^{m^{eff}},\] where

To try out this model I applied the flow cessation to a 2 parallel network model. Network one is a Neo-Hookean hyperelastic element, and Network two is Neo-Hookean element in series with a power-flow model with flow cessation. The figures below show the results. It is clear that the A parameter has a very strong influence on the predicted response.

The influence of the B parameter is shown in the figure below. In words, if B is close to 0 then the material can be deformed a lot before the flow cessation starts. For most polymers B is between 0.1 and 0.2. The modeling techniques shown in this article can improve the predictions of strain-dependent Young’s modulus, and make the stress response more strain-rate dependent at large strains. The following figures show one example. I recommend that you try it out in your own material model calibrations. Note The model features that are discussed here are available in MCalibration 6.7.0 and PolyUMod 6.5.0.
Facebook
Twitter
LinkedIn 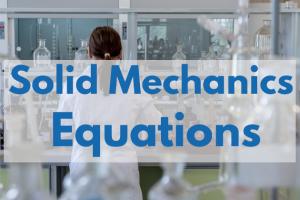 Free E-book with equations that I collected as part of my Ph.D. qualifying exams prep at MIT. 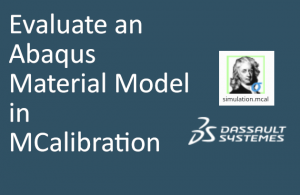 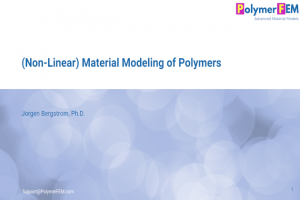 Here is a presentation about (non-linear) material modeling of polymers. I gave the presentation on 2021-06-24.